Commemorating World War I in the Village

This year commemorates 100 years since the beginning of World War I. It is a time therefore, to remember those who were lost in the effort to protect our country during the war years 1914 to 1918, including some former residents of Acocks Green. We are lucky to have an attractive war memorial outside our library which is a constant reminder of those locally who gave up their lives. The Village in Bloom team always make an effort to keep the planting around the area attractive and appropriate. 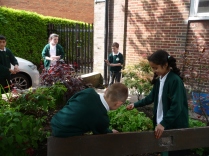 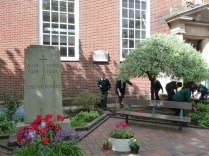 Poppies are the flowers of remembrance as they flourished on the battlefields of France after the war.  On a lovely sunny day at the end of April the Bloom volunteers were fortunate to have the help of some of the children from Acocks Green Primary School who sowed hundreds of poppy seeds. Fran Lee, the Bloom co-ordinator, explained to the young gardeners the significance of sowing the poppies to remember the fallen soldiers. The children then mixed the seeds with sand so they could see where they had been sprinkled, they then watered them in.  So look out for an array of red poppies around the memorial site soon.

3 Responses to Commemorating World War I in the Village