In December Joe Peacock from Birmingham Friends of the Earth, came along to talk to our Public Meeting about their campaign to reduce speed limits on residential roads.  This prompted an interesting discussion on the subject.  Everyone agreed that a 20mph speed limit would be most appropriate around schools. 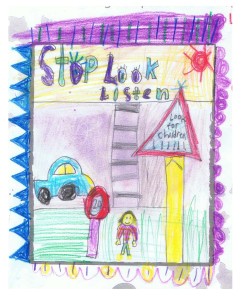 To coincide with Walk to School Week in May Birmingham FOE launched a poster campaign to promote Twentys Plenty.   Children from Birmingham schools were encouraged to enter and the entry from Phoebe Way,  a Year 3 pupil from our local Cottesbrooke Junior School, was chosen as runner up.

Birmingham Friends of the Earth with support from a number of other organisations nationally and locally are asking the council to introduce a 20mph default speed limit on all residential roads throughout Birmingham.

According to FOE,  Birmingham City Council will only support 20mph speed limits in certain areas, mostly around schools. The main reasoFn given is that it would not be cost-effective to implement.

FOE believe that implementing 20mph on all residential roads does not require the introduction of expensive traffic calming methods.  They say that in other towns it has been shown to reduce traffic collision rates with children and other vulnerable road users considerably, which has significant cost implications.

Overall, the benefits of introducing a city-wide 20mph speed limit are that it would encourage a shift from driving to walking and cycling, creating a healthier environment in which communities could thrive. This would also help to deal with two of the major threats that our society faces today; climate change and obesity.

If you would like to help Birmingham FOE make this scheme a reality contact them on 0121 632 6909 or email campaigns@birminghamfoe.org.uk