Following the very successful first meeting as a working group for the ‘Adopt a Stretch of Canal’ project, where around 15 volunteers worked hard litter-picking and tidying; our ancient waterway appeared on Central News on Thursday 14th May.

On 30th April the working boat and crew came along the canal to collect litter and debris that has been dumped on the far side banks and in the water. Some volunteers came out to support the boat’s work. There was a Central News presenter and and film crew on site to cover the story.

The Canals and Rivers Trust are highlighting the important work that volunteers play in looking after local canals and how local people getting involved promotes a sense of ownership and pride in these historic waterways. 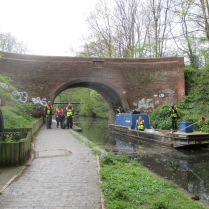 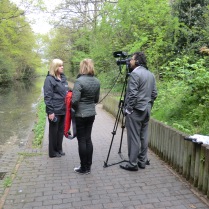 Thanks to Bryan Smith and David Treadwell for the photos taken on the day.

The next Working Group (e.g.litter picking, maintenance, towpath improvements) will be on Saturday 13th June. Meet at 10am on the old canal bridge on Woodcock Lane. Wear sensible shoes/boots. All equipment will be provided – come and join in and help improve our waterway. Everyone is welcome.