On Friday 16th December there was a Community Christmas Party for people who play an active role in the community of Acocks Green. It was set up several years ago to acknowledge the work of community champions and named after long-standing Acocks Green Carnival volunteer Ray Newton. This year it was presented to Mike Byrne who is a familiar face in Acocks Green and hard to miss bring a very tall man. The former Librarian at Acocks Green Library, Mike has established and continued to play a key role in the historical and cultural development of Acocks Green.

Mike originates from Nottingham and came to Birmingham in 1969 to study at Birmingham University, and after graduation in 1973, joined the library service in Birmingham in 1974. He commenced as a librarian at Central Library, moving to Hall Green, then South Yardley until joining Acocks Green in 1993. 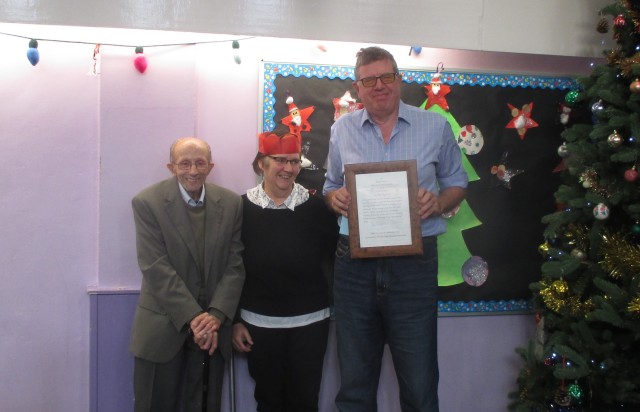 Whilst in post as Librarian, Mike was very influential in facilitating opportunities for the history and heritage of Acocks Green. He was instrumental in producing one of the most detailed and thorough histories of Acocks Green and supported the local history society. He also produced and published a number of local history books and a pictorial record of
local areas.

Even though Mike is resident in Kings Norton, he has always shown a particular interest in Acocks Green, promoting a number of regular groups and events to celebrate the particular heritage and culture of outhe area such has the Local History Group, Arts and Media Group, Friends of the Library and the regular professional musical concerts –Swansong  that take place at St Mary’s Church. These all add to the cultural scene of Acocks Green and the interests of its residents.

The latest addition has been the promotion and establishment of the Village gaining its own Heritage Trail, one of only a few in Birmingham and comprising of eight information boards around the village, linked to the Village history website and supported by tour guides and an information leaflet.

Through Mike’s unwavering efforts and enthusiasm, Acocks Green has been well served in its heritage and culture, which could be considered ‘second to none’. In short, Mike has worked tirelessly, often unacknowledged in raising the substance and profile of Acocks Green.In fact, the Village of Acocks Green would be a lesser place without his
interest and commitment.